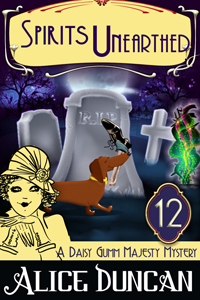 On the Monday before Christmas in 1924, the weather was frigid. Well, that is to say, it was darned cold for Pasadena, California, where the weather seldom, if ever, gets truly frigid. It must have been in the low forties. That might account for the reason Sam Rotondo, my fiancé, was in such a foul mood. Or maybe the cold weather made his wounded leg hurt. I don't know. All I know is that he didn't want to do what I wanted him to do. "This is stupid," said he, as he limped through the Mountain View Cemetery in Altadena, California. To give him the benefit of the doubt, I must say that walking to my late husband's grave was a struggle for him. He still had to rely heavily on his cane, given to him by Dr. Benjamin after Sam was shot in the thigh by an evil woman. As it had rained recently, the cane kept getting stuck in the moist soil, and Sam kept having to yank it out. Spike, my late husband's brilliant dachshund, trotted beside Sam and me. I'm still not sure if dogs were allowed in the cemetery, but nobody kicked us out so what the heck. "It's not stupid," I told Sam. "It'll make me feel better." "It's stupid whether it makes you feel better or not," Sam grumped. "Oh, stop it. You just enjoy complaining, don't you?" "No. I don't enjoy complaining. Ow!" He had inadvertently stepped into a hole with his left leg, the one that had been shot, and I guess he wrenched it pretty badly. "Watch where you're going, Sam," I said. Not awfully sympathetic of me, I know. "Cripes. This is stupid." "You've said that before." Spike at least was enjoying himself. He ran this way and that way and generally tore around, as happy as a hound ever was. He had a nice big yard at home to snoop and sniff in, but it was nowhere near as large as the cemetery. "That's because it is," snarled Sam. "Pooh." But we made it to Billy's grave eventually. I stood beside it, looking down, and wishing Billy was still alive. On the other hand, then I'd have two men in my life, and one was almost more than I could handle. Poor Billy had suffered terribly after the Great War. He'd been gassed and shot and had been in constant pain until he'd finally taken matters into his own hands and drunk an overdose of morphine syrup. I understood his reason, but I'd suffered mightily after his death. It's hard to lose a person you've known and loved all your life, even when you knew it's going to happen eventually. Sam had suffered, too. His late wife, Margaret, was buried not far from Billy. My aim that day was to tell both Billy and Margaret that Sam and I were engaged to be married, and we hoped we had their blessing. So, technically, Sam was correct. This trip was stupid. Heck, I made my living—a darned good living—as a spiritualist-medium to the wealthy ladies of Pasadena who had more money than sense. If I actually could talk to dead people, I'd have asked for Billy's blessing regarding Sam and me a long time ago. I remained relatively undaunted, however, because it seemed somehow important to me to say the words to Billy, even if his soul had long since departed this earth. And I wanted Sam to say the words to Margaret, too. He probably wouldn't, so I'd have to say them for him, Sam not being one to ask for people's blessings on a regular basis. Well, I wasn't either, but this trip to the cemetery just felt right. Still staring at Billy's beautifully carved headstone—it said "Sacred to the memory of William Anthony Majesty. Beloved husband of Daisy. July 12, 1897-June 10, 1922. Rest now as you could not in life. The Good Die First"—I said softly, "Billy, you got your wish. You asked Sam to take care of me after you were gone, and he's going to do just that—" Sam said, "Huh," interrupting me. I shot him a glare. "Anyway," I continued. "I hope Sam and I have your blessing for our union. We don't know when the ceremony will take place, because Sam got shot and is still recovering, but we'll get married one of these days." Spike rushed up to Sam and me, a man's shoe clutched in his teeth, his tail wagging deliriously. "What the heck?" said Sam, looking down at Spike. Distracted from my purpose, I too, peered at my dog. "Where in the world did you find that, Spike?" Because he was a dog, Spike didn't answer. Rather, he dropped the shoe at our feet, smiling up at us. Don't tell me dogs can't smile, because they can. He looked quite pleased with himself. "Where'd you get hold of a shoe, Spike?" Because I knew Sam's leg hurt, I was the one who bent and picked up the shoe. It was quite heavy for a shoe. I squealed when I saw the reason for its heaviness. The stupid shoe held a foot! I dropped it and clutched Sam's arm. "What the—?" said Sam, startled "Sam! That shoe has a foot in it!" "What?" "It's got a foot in it!" Because I figured I should, I bent and picked up the shoe

Copyright 2017 | This page is the property of eBook Discovery | Images and text used with permission.